skip to main | skip to sidebar

Below is the text of a letter I received from a close friend in Germany, Dr. Detlef Meyer-Ohlert. As a devoted reader of Kafka, I found it interesting.

Some time ago you had told me that you are reading Kafka. If my memory is correct I had responded to it and reported which books I had read and which are part of my library.

So I thought that some news may interest you about Kafka’s unpublished works. Since many years one can notice the excitement about his estate particularly with respect to the original drafts, manuscripts and letters although Kafka had determined in his will that all this material should be burned up after his death. But the heirs or curators didn’t follow his instructions as you probably know.

Recently 45 letters and 66 postcards, which Kafka had written to his sister Ottla between 1909 and 1924, were presented in an auction in Berlin. The lowest bid was determined at $ 500.000. But the German Archive for Literature in Marburg was unable to pay this amount. It was therefore most probable that a private collector would make the buy as happened with the letters of Kafka to Felice Bauer 25 years ago. But in this case two public archives prevented this. The German Archive for Literature and the Bodleian Library of Oxford cooperated and they bought the letters jointly. This deal was sponsored in Germany with money of the Federal Government, the State Baden-Württemberg and private donators, in Britain solely by private donators. The letters to Ottla are stored in Marburg but the Oxford Library has access to it at any time. The final price is unknown. Two thirds of
Kafka’s estate, of which the manuscripts of the “Schloss”, “Verwandlung”, and “Urteil” are owned by the Bodleian Library, the “Process”, “Letter to the Father” and the letters to Kafka’s love Milena Jesenská are owned by the German Archive. It is estimated that these two institutions are administering four fifth of Kafka’s autographs.

Attached is a facsimile of a postcard which Kafka wrote to Ottla from Riva del Garda. I cannot identify the date but it is certainly one prior to World War I, because the card carries an Austrian stamp. Kafka reports that he had visited Malesine (Italian territory) a few miles south of Riva where Johann Wolfgang von Goethe had his affair and tells his sister that she would know about it if she had read Goethe’s “Italian Journey” and recommends that she should do it. He continues that the Castellan in Malesine had shown him the place where Goethe had worked on a drawing but that this place doesn’t correspond with (Goethe’s ?) diary, and that he (Kafka) had also difficulties to understand the Italian of the Castellan. I’m also attaching a picture of Kafka and his sister in their home quarter in Prague. DMO 05.09.2011 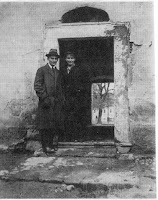 kwh
Dallas, Texas, United States
is the author of four novels, "Vogel Flies South," "Vogel and the White Bull," "Cave Gossip, and "Grimoire of Stone: A Romance of Water;" and two books of poetry, "Petroglyphs," and "Sea-Snails on a Black Chow’s Tongue or, a Castaway’s Poems in a Bottle." He divides his time between Frankfurt am Main, Germany and Dallas, Texas. In 2009, his portal fantasy novel, "Okeanus," was a semi-finalist in the Amazon/Penguin Breakthrough novel contest. He is currently writing short stories set in an alternate history, code-named: La Ciudad, and working on a new series. The first novel, "The Grimoire of Stone," is finished and available from Amazon.com. His next novel "Attis Chapel" is a Heinleinian space opera with Lovecraftian motifs. Set in his La Ciudad series, it further develops the background begun in "Grimoire of Stone."